HITTING THE ROAD TO HELP AUSSIE KIDS BE KIDS 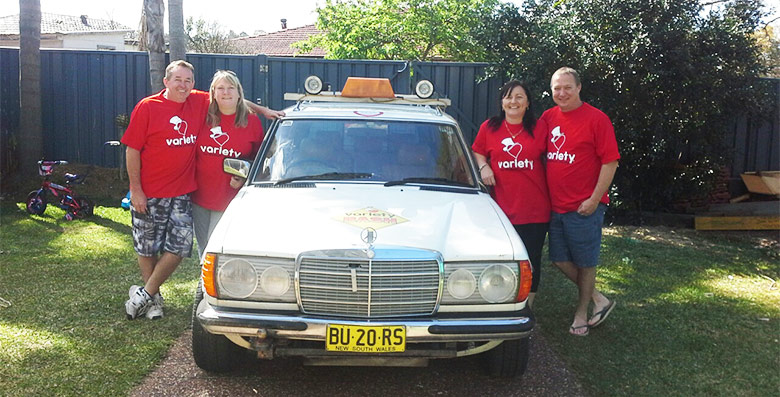 Our Newcastle Operations Team Leader, Jacquie, along with her hubby Peter and mates Karyn and Stuart, has been very busy getting ready for this years’ Variety NSW Bash.

Jacquie and her team will be hitting the dusty roads of rural NSW in a decked out 82’ 230TE Mercedes.

Our Newcastle Operations Team Leader, Jacquie, along with her hubby Peter and mates Karyn and Stuart, has been very busy getting ready for this years’ Variety NSW Bash.

Peter, Jacquie, Karyn and Stuart beside their ’82 Merc.

Jacquie and her team will be hitting the dusty roads of rural NSW in a decked out 82’ 230TE Mercedes. Their 7-day adventure will take them right around the state, visiting local communities from Newcastle out to Dubbo, Coonabarabran, and Goondiwindi before heading up through Casino, Grafton and Tuncurry.

This year’s route through regional NSW.

Now in its 25th year, the Variety NSW Bash continues to raise much needed funds for children who are sick, disadvantaged or have special needs. Throughout the Bash, Jacquie and her team will visit local towns, stopping into the schools to visit the kids (some schools having only 5 students!).

The Bash was started by businessman, explorer and philanthropist Dick Smith in June 1985 when he organised a group of people to travel from Sydney to Bourke in far west New South Wales, and from there to Burketown in Northern Queensland.

Dick wanted to take a few mates for a drive in the Outback in old cars and at the same time raise money for charity. He charged everyone to enter, and entrants were able to bribe the officials or be fined. That first event raised $250,000 for Variety and was known as the Bourke to Burketown Bash.

The Bash has been staged by Variety since 1985 and the spirit of the original idea has been retained. Every entrant has to raise a minimum of $4000 for Variety – the Children’s Charity and all vehicles must be manufactured prior to or during 1976. The Bash is not a race, nor a rally rather a celebration of the entrants’ hard work fundraising throughout the year and  essentially about relaxing and helping to raise funds for kids in need.

You can get on board and support Jacquie and the kids by donating to Variety – the Children’s Charity: